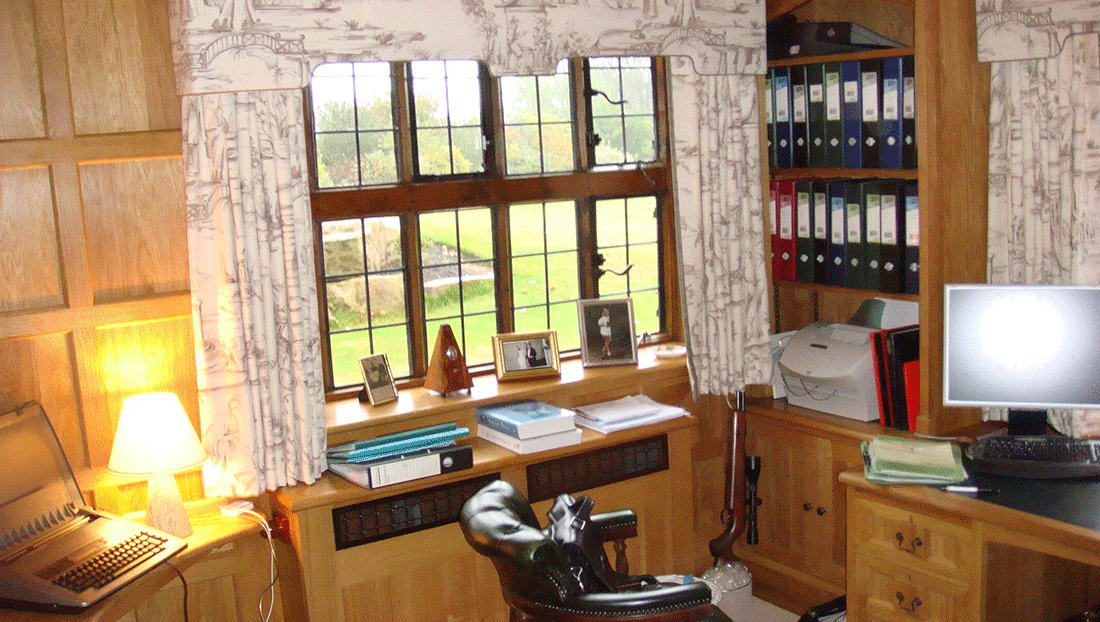 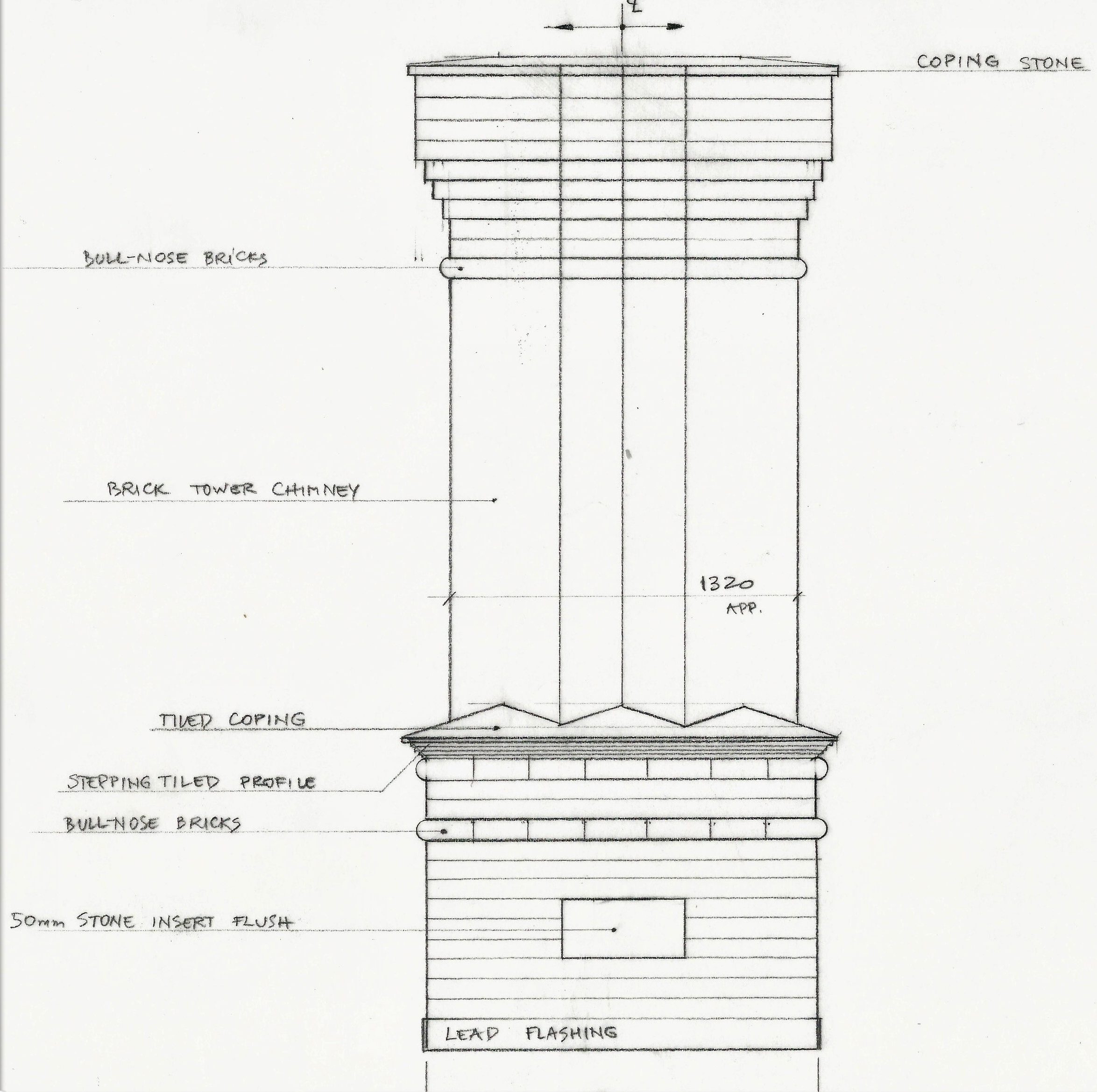 The subject property is located in Surrey and provides 6000 sq feet of accommodation, principally over two floors. The Manor is a Grade II listed property and comprises an Elizabethan Great Hall at one end and an Oast House of similar age at the other, with the remainder of the house comprising an infill built in the “Arts and Crafts” style in the early 20th Century.

When we first saw the house in 2003 it was in a poor state of repair as it had not been updated for many years and was in need of refurbishment.

The first thing that caught our attention was the chimney, which stood in the middle of the property and took the eye as you approached the house from the drive. This central chimney was very plain and contrasted with the elegant chimneys at either end of the house.

With the Client’s agreement we produced a design for a chimney to replace the existing one in the style indicated:

We then engaged the services of an artisan bricklayer. Later we sourced miniature bricks for the chimney and after some trial and error the bricklayer was able to emulate the brickwork on the remaining chimneys. Interestingly on one of the other chimneys a small stone plaque had been incorporated into the chimney base and this bore the initials of a previous owner. Our Clients liked this idea and a small stone slab was included in the construction however the Clients stopped short of carving their names in the stonework.

The next phase of the refurbishment was the roof. The roof was large and finished in plain tiles many of which had been affected by frost damage and required replacing. In consultation with the Client it was determined that the roof should be completely stripped and recovered and as this was a single trade operation it was decided that we should employ a roofing company direct rather than engage a contractor who would then sub-contract the roof works. Fortunately, we had previously had excellent experience of re-roofing another manor house nearby, so we approached the firm that undertook that project, “BJN Roofing Contractors Ltd”. and they were awarded the contract.

BJN approached the works with care and meticulous attention to detail and by the time the works had been completed the roof had the additional benefit of high performance felt coverings laid across the rafters and all the leadwork had been replaced to a high standard.

Moving on to the main works package in addition to repairs and refurbishment there were a number of specific changes the Clients wished to make:

On the ground floor a conservatory was required as an extension to the kitchen. In keeping with the style of the house this was to be constructed from large Oak timbers with glazed panels and a pair of French windows giving access to the rear terrace. This extension was to be constructed with a plain tile roof to match the main house.

A further change was the installation of French windows into the external wall of an irregular shaped room adjacent to the conservatory to replace a window, so the room could be used as a playroom.

The Client also commissioned us to form a study in one of the rooms in the Oast House which had long views across the garden. This room was lined with oak panelling incorporating shelving and contained a bespoke built in desk and radiator case.

Additionally, the house had a wing which on the first floor housed a bedroom with an en-suite bathroom and on the ground floor a utility room. The Clients requested a basement be constructed under the utility room to provide a substantial wine cellar. This necessitated our introducing an oak spiral stair extending from basement to first floor level.

Externally windows had to be repaired or replaced, some exposed oak posts and beams required repair or replacement and on completion all surfaces normally decorated had to be painted or polished.

Internally partitions were modified to provide a new configuration with nine bathrooms constructed or updated and a new kitchen created at the heart of the house together with repairs to oak beams and posts as well as extensive French polishing.

Due to the configuration of the house and the Client’s bespoke requirements, a considerable amount of fitted furniture was designed and installed including bookcases, vanity units, doors and wardrobes etc.

Work on services was substantial and included re-wiring, re-plumbing and a new heating system which was fuelled by Calor gas stored in subterranean tanks. All external services had to be replaced and these were re-run from the house to the public highway.

Another challenge was the external works which required a new driveway be introduced together with substantial re-profiling of the existing contours around the house.

The original drive was bitumen based and finished with tar spray and chippings. The Clients however did not want gravel walked into the house, so it was decided to finish the area around the house with cobbles. Following extensive research in the UK we couldn’t locate any cobbles of a suitable colour, so we looked further afield to northern France and found a church in Normandy which was seeking to sell cobbles from a disused parking area.

The Client went to view the cobbles and agreed to purchase them, following which we arranged transport and had the cobbles brought back to the UK.

The contract was based on specification and drawings and let to contractors “Rok Group”, based in Crawley. The contract was a substantial one being in the region of £2M and experienced considerable challenges in terms of resourcing and weather. After a year on site however the works were completed, and the Client was able to move in with his family.